Home » Productivity » 6 Easy Ways to Work on Your Blog Using Only Your Smartphone
Productivity, Start an online businesss, time management

Seeking ways to work on your blog more when you feel like you don’t have time?

In this article, you’ll learn 6 ways to work on your blogging business using only your phone. These are perfect for busy moms, when traveling or when you just can’t get to the computer to work.

Running a blogging business is an exciting and fun way to start an online business while serving your readers. It’s a creative outlet that allows you to help people while also providing for your family from your own home. Win-win!

What’s not so obvious when you started this whole blogging thing is the amount of work it requires.

There are a bazillion little things you have to do to keep a blog going and then to grow your business, you have to add onto that list.

As a mom with young kids at home, you might not always be able to sit down for hours on end in your cozy office space working away on your blog (this is a dream!). Maybe you’re traveling and away from the computer? Or you have the kids all day and don’t have daycare options? Whatever the reason, you need tips on how to get things done and here’s where you’re going to find them. So how can you get more accomplished with your blog if you can’t sit down at the computer to work?  Use your phone of course. Here are 6 ways you can work on your blog using only your phone. This is key because that means you can do it from anywhere pretty much regardless of the circumstances (within reason of course).  Using these productivity hacks, you will be able to take action toward your business goals anytime you need which is going to reduce your stress because you’ll feel like you’re getting stuff done. Because you are!

As a blogger, Pinterest is likely a very important source of traffic. I say manually pin because a lot of bloggers are using Tailwind to schedule out their pins. Not everyone is using Tailwind though and sometimes manually pinning is still effective.

So while you’re traveling, you can be scrolling through Pinterest looking for relevant pins to fill up your personal boards.

This can help your blog because the more you pin to those boards, the more relevant those boards look when you post your own content later. This means your pins will get in front of more people faster.

If you’re new to blogging or you just haven’t gotten around to it, you can also take this time to spruce up your Pinterest SEO by optimizing pin descritpions, board descriptions titles.

But now you have the perfect excuse!

This one is easy to do from your phone, obviously.

Just go onto your preferred social media platform and start commenting, liking, sharing etc. on posts from your favorite bloggers in your niche and potential readers and followers for your own blog.

This could also be a good time to do some Instagram stories to show your readers who you really are and increase that “know and trust” factor.

This one is a favorite of mine. I am definitely a course junkie. If you’re anything like me then you have so many courses both free and paid just waiting for you to go through. This is something that you can do pretty easily by putting on some headphones in the car or on the plane or even sneaking away once you’re at your relative’s house. We often sign up for courses with good intentions, but it feels like we don’t have time to listen and really concentrate on the course. Now is the perfect time to dive into some of those courses you’ve been meaning to get to and increase your knowledge to ultimately improve your business.

4. Read articles to improve your knowledge

This one is really valuable and again something that we often overlook. How many times have you pinned a great article on Pinterest but not actually gone through and clicked it and read it? I know I’m guilty! Now that you have some potential downtime, you can go through your Pinterest and actually read some of those articles that you pinned for a reason. I know that I started doing this recently, and there’s so much  good knowledge out there that isn’t in a course yet but is really valuable if we’ll just take the time to read the articles. Plus it gives you a chance to leave genuine comments to help build your blog traffic and network with other bloggers.

5. Brainstorm and jot down ideas

Brainstorming is a very powerful tool for creating content. It’s often hard to take the time to brainstorm and come up with new ideas when you’re doing the normal day-to-day things that have to happen in your blogging business.

Since you don’t have a ton of things that you can do without a computer, take the time to just think about all of the things that your reader wants to know and how you can provide the most value to your reader.

Jot down these ideas and later, you can go back and siphon through them to figure out which ones you want to go with.

I find that when I do this traveling, I often come up with tons of ideas for blog posts,  product, emails, videos,etc. It’s like my brain is able to only focus on that so the ideas just flow onto the page or onto my phone screen.

6. Draft out blog posts on your phone

Take those ideas that you just brainstormed and start drafting them.

Using Google Docs, it’s really easy to draft out your blog posts by either typing or by doing voice to text on your phone. It doesn’t have to be perfect. Just get the idea onto a Google Docs and you’ll be able to go back and edit it later when you’re ready to post that article.

This is something I’m doing right now.

This tip can really help you feel like you’re ahead because if you can get some of those blog posts knocked out then. you’re already ahead of the game.

I actually did this recently when I was traveling to visit my dad for Thanksgiving. In a matter of an hour, I had used the voice to text to draft out three post and two emails. It was really easy to then just go back and edit that content when I was ready to go.

I would highly suggest giving the voice-to-text a shot because it can help you write like you talk and that will hopefully flow better and sit well with your reader.

I find it also helps me to write faster because I’m not worried about it being perfect because I know that I’m going to go back and edit it.

Yes, technically, I can always edit it regardless of where I write it, but it just feels different doing it on the phone instead of the computer. It’s like you have more creative liberty that doesn’t always come easily when you sit down at a computer to write.

There you have it. These are methods that I have personally used to work on my blog when I am away from home or just unable to sit for a dedicated amount ofvtime at a computer.

These are going to help you feel like you are moving forward in your business even when you can’t be there.

For me, this has been huge because if I’m not doing something on my business then I can start to feel anxious and overwhelmed in the moment.

So to be able to enjoy the time with your family, having these techniques in place can help because you’re still working on your business but also visiting with them.

Are there any other ways to work on your blogging business when you can’t get to the computer? I’d love to hear your ideas in the comments below. 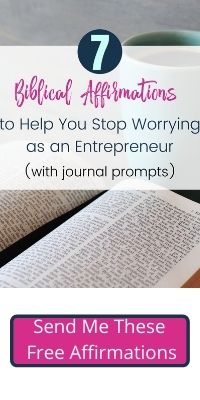